DW: Last October, you were released from prison after serving a sentence of five and a half years. Today you are again sentenced to 30 months in prison and 80 lashes for “propaganda against the political system, slander and rebellion against the prison administration”.

Narges Mohammadi: I was sentenced because I denounced the prison director Gholamresa Siaei to the authorities. In January 2020 – while I was still imprisoned in the women’s section of Evin Prison in Tehran – he personally took me out of my cell and brutally beat me. He was angry with me because I organized a prisoner strike to protest the brutal crackdown on anti-government protests in November 2019.

Subsequently, I was transferred against my will to another prison, 350 kilometers west of my home in Tehran. When I arrived at the new prison, I immediately requested a forensic medical examination. As a result, a doctor examined me and made a written report documenting the evidence of injuries to my body.

The report was submitted to the relevant prosecutor’s office. My family members who visited me in prison saw the wounds and bruises on my body. I am the plaintiff in this case, but justice is trying to turn the tide to put me back behind bars. There’s no way I’m willingly complying with the sentence. Nor will I report to the authorities for the execution of the lashes.

What do you think will happen next?

I guess they will come and get me soon. Then I will be in prison again for 30 months. I’ve been a human rights activist for 23 years, since my student days. I have been sentenced to prison four times so far. Most recently in 2015, after a meeting in Tehran with the then EU foreign affairs representative, Catherine Ashton.

At that time, you were sentenced to ten years in prison for arguing against the death penalty in Iran. The charge was “propaganda against the political system”. You have now been convicted again for the same reasons.

The EU has called the legal action against you “alarming” and calls for a review of the case on the basis of “respect for international humanitarian law”. Why is justice acting so harshly on you?

Mainly because I am a woman who does not give in. Since the founding of the Islamic Republic of Iran in 1979, women in Iran have been systematically oppressed. Those who do not comply are punished. Women who resist, like me and other human rights activists, challenge this system. Those in power are trying everything they can to break us down and silence us. 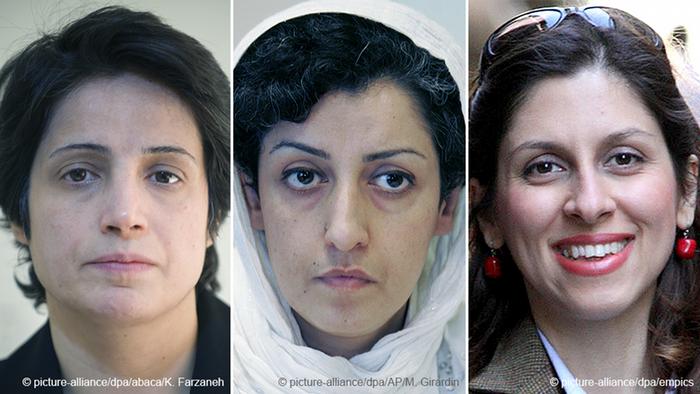 The situation for human rights activists in Iran is dire: Nasrin Sotoudeh, Narges Mohammadi and Nazanin Zaghari-Ratcliffe are three of the most popular jailed activists.

For example, I haven’t seen my children for five years. During my incarceration, my children went to live with their father, who is in exile in France. Now the authorities do not allow me to leave the country to see my children. They said to me, “Find a way, cross the border illegally.” If I leave the country illegally, I will no longer be able to enter legally. They want me to disappear. But I want to stay and I will continue to work peacefully for human rights and democracy in Iran.

What do you expect from the EU?

May he support our peaceful efforts for human rights and democracy in Iran. For example, let him use every opportunity and every conversation to ask the Iranian authorities why we are being denied our constitutional rights. According to the constitution, citizens are allowed to engage socially, to form NGOs and to organize peaceful assemblies. But for us, all this is forbidden. Strengthening Iranian civil society must be part of European security policy. Iran is the most populous country in the Persian Gulf and has great influence in the region. A strong civil society in Iran could positively change the country from within.